Dialogue that was born from the curiosity that arose to some students following the election of the new rector of the Politecnico di Milano and the end of Ferruccio Resta's mandate. 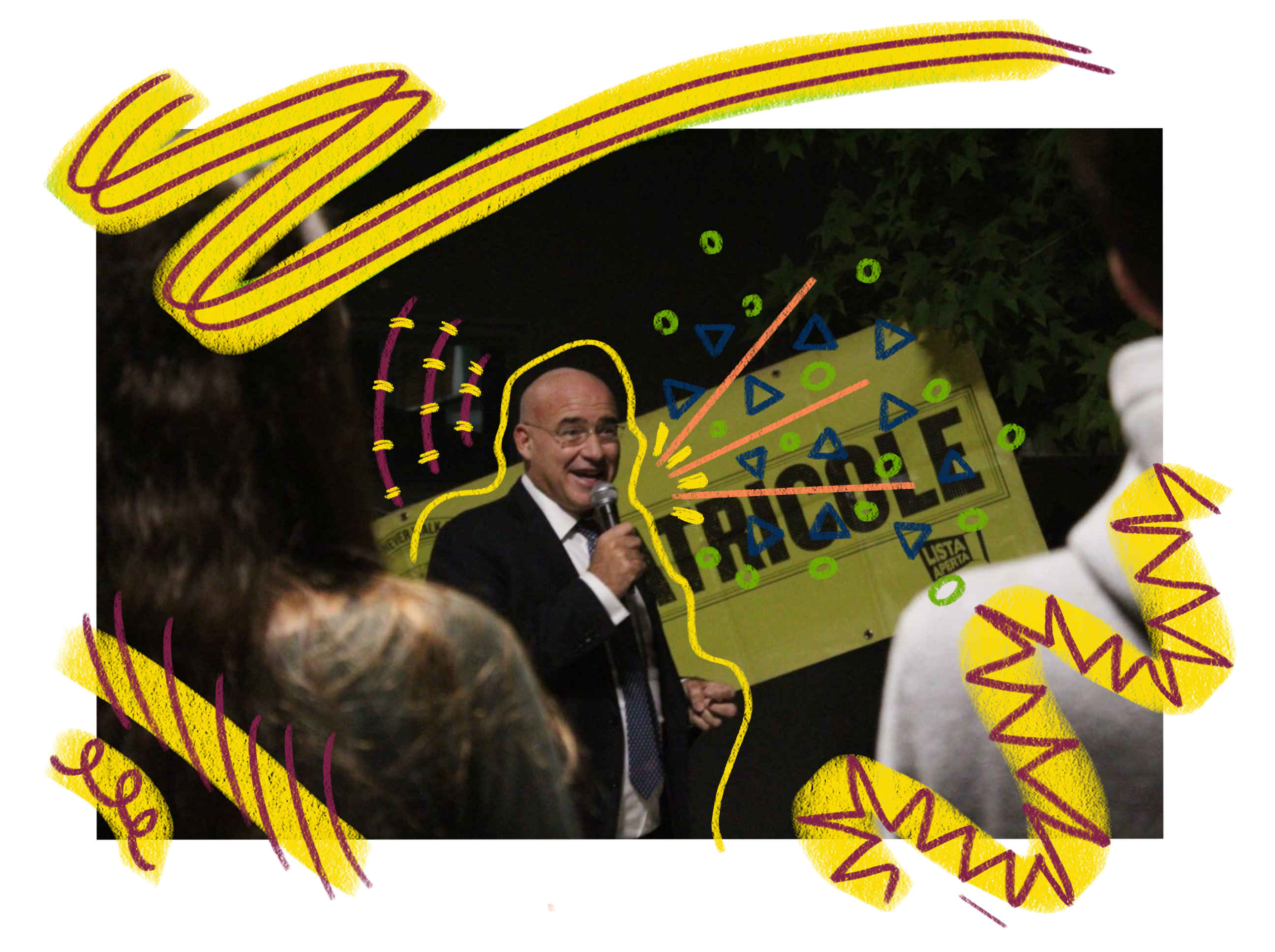 Why did you decide to run for six years ago?

I am what can be defined as a “Politecnico” product. I graduated from the Politecnico di Milano, I did my doctorate, I had a very small experience abroad, but then my whole career took place here. I was the Director of the Department of Mechanics and I also played the role of Delegate for Technology Transfer during the rectorate of Giovanni Azzone (Rector prior to Resta). So, when the end of his mandate approached, the desire to be able to make a contribution also as Rector began to arise in me. At the same time, the concern arose in me to be up to the task. I then began to compare myself with the people closest to the Rectorate. Afterwards, I talked to some reference people and over time this idea has matured. One of the events that led to the realization of that idea took place during a trip to New York with my family, in which I talked at length with my wife to come to the conclusion that the idea of the candidacy was really feasible.

Tell us about a significant episode for you that marked these six years.

In these years there have been many moments of great satisfaction. Moments of great tension like that of the pandemic that has marked us violently. When I ran for office and won the election, in January 2017, a few months later, the first thing I did was change the Academic Calendar, with some great discussions with the then President of the Student Council. I was convinced that we had to align ourselves with international standards, otherwise we would not be able to make student mobility policies. Between June and July there was a huge movement of national university professors for a salary adjustment. In September 2017 the teaching staff decided to adhere to the abstention of the exams and the degree exams, this is the typical element that creates a rift between different souls of the University. Of course, the student body saw the right to be able to take the exams violated (with the consequences that you can imagine) and the teaching staff had an infringement of the rights to recover salary increments that in some way had not yet been adjusted after the 2008 block. This was the first moment of crisis. We had made sure to immediately duplicate the exam sessions two days late, so all students could take the exam two days later. In the end the situation was well managed, we were all satisfied. I said to myself “enough I lived my crisis”. It had been since 1968 that university exams had not been interrupted. At that point I thought my Rectorate would be downhill… But there have been other tiring moments that have marked these years.

What has been the most difficult moment to face during this mandate?

The most difficult days were certainly those around February 20, 2020. I was returning from Rome and had just been elected President of the Conference of Italian Rectors. On the train I learned about the first case of Covid-19 in Codogno (Lombardy). People talked about it as if it were the most feared of enemies, we did not realize that the problem was bigger than what was possible to see as when observing with a microscope. On Saturday 22 February, two days after the detection of the first covid infection, it was clear that the situation was getting worse: the increase in cases was exponential, it was understood that the situation was precipitating very quickly. The next Monday the University should have reopened for the second semester: about 47,000 children would have returned to the classrooms, also considering the arrival of international students. In the event of an early pandemic, we would have created a very large infectious basin. I remember, even comparing myself in those hours with the rector of Bologna, that we were perhaps the only ones who understood that it would have been easy to close the University, But it would have been very difficult to reopen it because this would have meant taking responsibility for ensuring the absence of the risk of contagion, and so we had to be very cautious in handling the situation. Then the decision was taken, which was very difficult for me, to communicate: “We close for the semester and equip ourselves accordingly”. We equipped ourselves to go all the way to that choice, even if we did not have the immediate tools. The whole University moved promptly from Monday morning, from preparing tutorials for the use of distance learning tools to the discussion on how to set the timetable. At that point, in the face of digital conversion, there was no need to take lessons during university hours, so many universities decided to register them and then make them available. However, I wanted to keep a fixed time and appointments, such as the Open Day. I was strongly persuaded that life should go on.

Among the various commitments you have always had time to devote yourself to students, where does this passion and attention come from?

Teaching is something I’ve always enjoyed, except during the year of Covid when I deeply hated going to the classroom, I didn’t have fun and if I don’t have fun I can’t convey passion.

There is a decree that allows the Rector not to do teaching; yet, I have never availed myself of this request. I always wanted to teach my course, but I could never do only teaching because I like to do research. I like to do collaborations with the outside world and I have done a lot of consulting. University life is beautiful because it provides all these ingredients. The best part is that you also have the opportunity to compare yourself with different people:  next year you will not be there as a representative… but who you have in front of you is always the same age.  So either you keep up to that generation or you have nothing more to say. They do not look for you because you are not longer an interlocutor with whom to compare. To live up to the new generations you have to understand them, you have to read them and know what they want, you have to know what they ask, you have to be authoritative and you have to provide answers. All this stimulates you to make a personal journey. If you are in this office, sitting at this table thinking about policies without looking people in the eyes when you expose them and without seeing the effect they produce, there is the risk of taking drifts that could go in the wrong direction. So, I always tried to dedicate time to the students and then of course to the Student Representatives. I met students in the classrooms, at the “Sagra della Matricola”, at the “Winter Gala”, at Open Days… in those moments you understand what’s your job.

Is there anything that would change about these years in office?

Yes. Moreover, in this moment of electoral campaign for the new Rector, I sum up because I see new content and rightly new proposals. So, even though I’m a voter like many others in this campaign, I listen, I watch and I compare myself and I think it’s human for a person to evaluate what he did with what he could have done.

I am someone who is never happy and who tries to look at what more can be done. Certainly there are aspects on which I wish I had had more attention. For example, on some topics of research, internationalization and laboratories (which I would have liked to strengthen more), If I could go back I would improve some aspects.

What have been the most significant relationships you have built during these six years?

There are so many.

Yesterday I heard a lecture by Carlo Ratti, a professor at MIT, who said that there are two types of relationships. There are those defined as “close”, those in which I know you and you know me and you two know each other and therefore in fact it is a triangle that closes in on itself. These are the ones that outline the relationships with our friends, with family and that are beautiful because they contribute to the construction of a community, they are a little drier for innovation, but much more serious for feelings.

Then, there are those relationships that are defined as a bit “distant”. Those who are established with people you meet once for work dinners or for a conference, a trip, someone that fate has placed before you in a certain contingency. Those people give you so much because they give you a totally different point of view from yours. So, in recent years the Student Representatives, the quarrels with some colleagues, the relationships with some rector around Italy or the world, with some Minister and with some business managers, have allowed me to expand these punctual contacts. Each one was a piece of history, a piece of a cultural baggage that I carry with me, even though I know that many of these are more linked to the “role” than to the “person”.  Probably when the mandate ends, the “closest” ones will remain and the “punctual” ones less, but it is really an important range of relationships that has allowed me to grow and see many different points of view.

What are your plans for the future?

Since I am a very pragmatic romantic, I prepared well in advance for the end of my mandate. I will experience a truly step-by-step change, as they say in mathematical terms. And what will change?  The adrenaline of the agenda will go out, as it will be empty and from January 7 it will have to be filled.  There is a second adrenaline that  is that of the decision. There are the groups, the monitoring units, the Senate, but in the end, the summary of the decision has always been up to me. Then there is the adrenaline of  reputation and visibility because you act as a representative of the Politecnico di Milano. So, these three light bulbs will go out. You must know this and you must be honored to have lived these years. It was a nice carousel and you will take it as luggage: there are aspects that will remain to you because no one takes them away from you, both personal and institutional results, movements and thoughts. I want to start building something that has these three characteristics.

I don’t have a clear picture of what I’m going to do, I will look for something that gives me the satisfaction of having an interlocutor of interest, an interlocutor who stimulates me like the Student Representatives did. I still have the desire to affect from the decision-making point of view and knowing me I will not retire to be a fisherman (despite I like fishing). I would like to start by remaking the agenda, there can be many small things that somehow enrich you. I have received some proposals, but none satisfy me and guarantee me the satisfaction I am looking for.