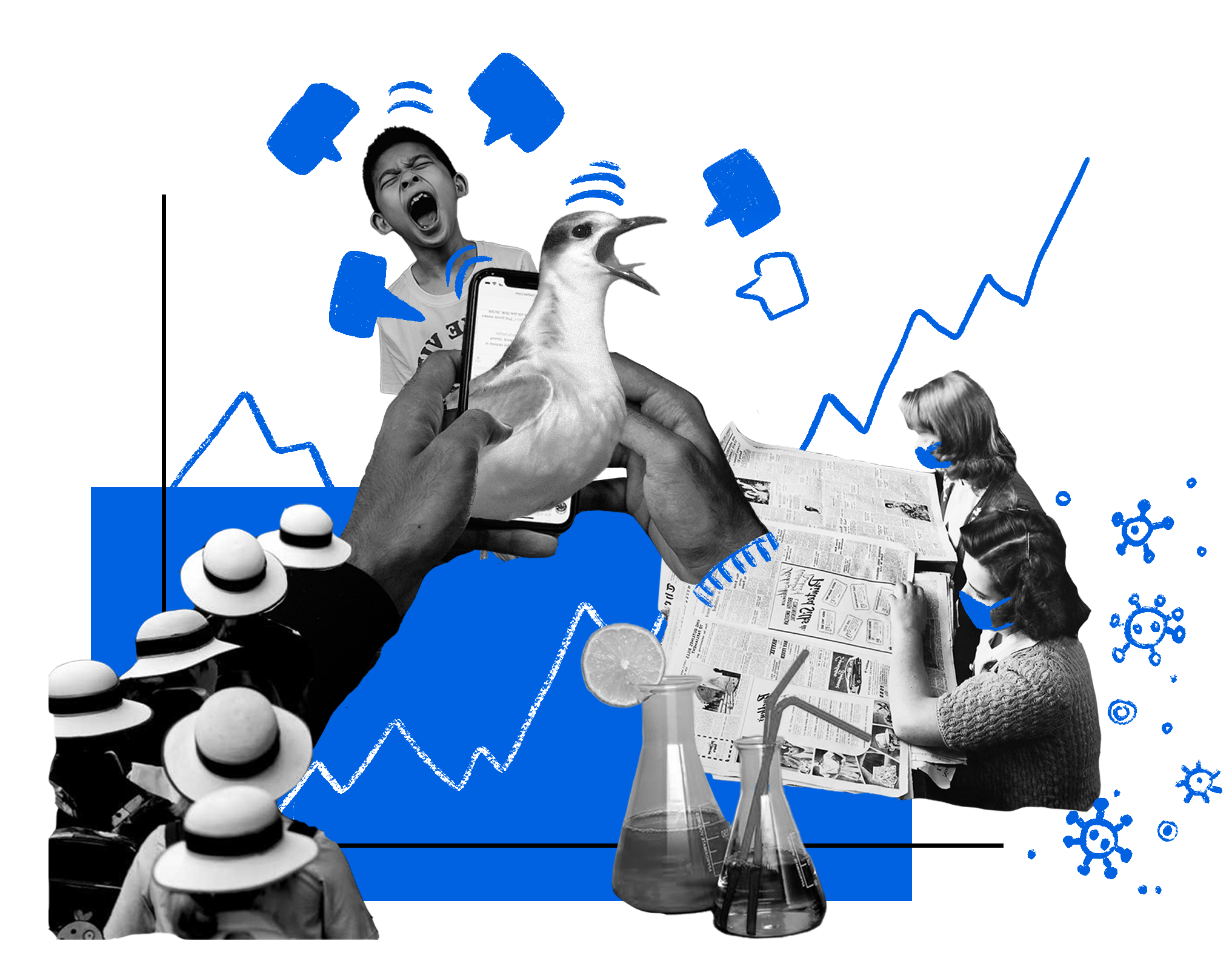 The first peak in hospital admissions, recorded in March 2020, was anticipated by an explosion of tweets the previous month.

While for the first a cure is persistently sought, the second seems to be rampant, it is a real information virus which, with the advent of social networks, risks damaging the system. Among the major causes: echo chambers, clickbait titles, distrust of expert opinion and the possibility of circulating news, real or otherwise, in an increasingly connected digital network of people who trust less and less.

Already with the 2016 American elections, we begin to talk more widely about fake news (3), but only in parallel with the infodemic is its study deepened and the need to control the flow of news grows.

While entire populations were forced to stay indoors during the various lockdowns, the power of social media and the news grew, the only watchful eye on the outside world. But with more information there is more fake news, and this is having an increasingly evident social response.

It has been shown that fake news spread more easily, also thanks to the fact that the user is attracted to what is new, different. They also sell cheap: an unverified title can be advertised at very low prices, and thus a vicious circle is created, in which the advertisements themselves contribute to the spread of disinformation. But that’s not all: with the crisis in journalism, many newspapers are focusing more on quantity than quality in search of titles that capture the attention of many, even at the cost of compromising the news (4), (5).

Interviewing Francesco Pierri (5) it emerged that one of the reasons why fake news takes root could be the human need to find oneself in communities.

Social networks facilitate this, allowing people to gather in groups and chats – the echo rooms – which can be compared to stadium fans, in which the confrontation of different opinions disappears, and a polarization of thought is created.

Still on social networks, we are witnessing the creation of the so-called “fringe communities” (for example flat-earthers, neo-Nazis, etc.), which, dealing with even delicate topics, would not have the same opportunity to expand live. The researcher adds: “As for conspiracy theories et al. I believe that the psycho-sociological matrix is ​​fundamental from an individual point of view, […] and what is observed in these groups are people often with serious socio-economic difficulties, who fall victim to those who take advantage of it to gain and exercise power about people.

The phenomenon of so-called “super-speakers” is linked to the latter consideration. These are very influential pages and accounts with many followers: it has been verified that the most shared messages come from them, despite being a small number of users. The role of “verified” accounts – that is confirmed by the platform and official profiles – is similar, which play a decisive role in the dissemination of infodemic content (6).

To tackle the problem, both the WHO and the governments have moved, promoting effective communication campaigns, which were then supported by social networks. If in journalism censorship is intrinsic in the editorial and printing process, on the other hand social networks are still trying to find a compromise between freedom of expression and limits to be imposed on users.

So a new question opens up: if new digital platforms are born to allow everyone to express themselves, is it right that controls and restrictions are introduced?

The manipulation with information is even easier with the use of the internet, it is difficult to verify the sources and judge whether a news is true or false even for those who work in the media and would like to limit disinformation.

In this regard, it seems only right to mention the frightening case involving Burma, in which Facebook did not intervene to stop messages of hatred and racism against the Rohingya and other Muslim groups. For many years, starting around 2013, these posts continued to spread freely on the platform inciting the genoicide of these religious groups, leading to the deaths of hundreds of thousands of people.

If the dissemination of false information can go so far, how can one not naively believe what is being served up? It becomes urgent to know who you can trust. But the truth is often not as clear as one would like it to be, its research forces us to leave a static and binary position. Let’s think of a simple object, a white or black cat: in this case it would be very easy, if not immediate, to judge the color of the animal. If, on the other hand, we were talking about something more complex, such as a mountain, the definition given would change depending on where the observer is. But who is below, perhaps has less reason than who looks from above? Can one find a more correct truth of the two? A single definition would be reductive in this case, the real need is to make the different, true, points of view communicate with each other.

“The assumption is that the world opens up differently for every human being, depending on the position that each occupies in it. The “sameness” of the world, its being-in-common, or its “objectivity”, lies in the fact that the same world opens up to everyone, and that, despite all the differences between men and their positions in the world, “you and I, both of us, are human” »(7) (Hannah Arendt).