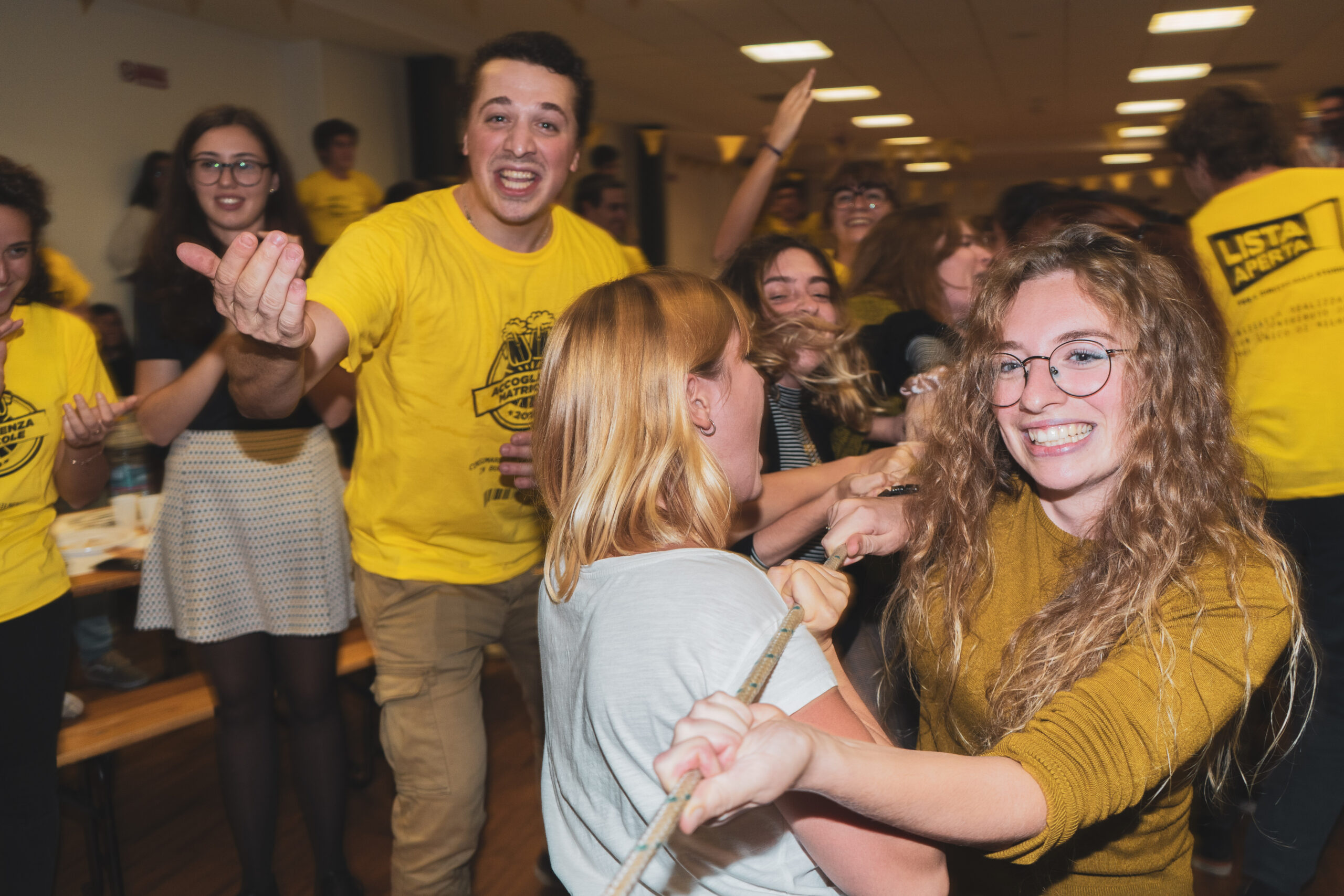 The Team of Lista Aperta

Eligibles = beneficiaries this year again! – DSU
It has in fact been approved by the Board of Directors that, even for the academic year 2019/2020, DSU grants will actually be granted to ALL eligible students. In the meantime, Politecnico has managed to directly allocate over 7 million euros to cover the students eligible for the DSU scholarship that had not been awarded due to insufficient state funds.

LOAN FOR MERIT
After a few months of work, the Convention between ‘Politecncio di Milano and Intesa San Paolo was approved, which will regulate the functioning of the “Per Merito” loan for Poli students. Students who obtain all the required requisites (payment of fees in good standing and 20 credits exceeded each semester) will be able to apply for a loan with very favorable interest, receiving € 1,500 per semester for students on site and € 2,500 for off-site students.

WATER DISTRIBUTORS AND VENDING MACHINES
In the past years we have put care regarding vending machines, here are the latest news:

• new water distributors in public spaces (15 in Leonardo, 14 in Bovisa and 2 in each territorial pole)
• reduction of environmental impact through class A, A ++ distributors and biodegradable cups
• lower prices and payment with cash and credit cards in addition to cash,. Furthermore, the old keys are replaced by the Poli card, which will work as a deposit in all respects.

NEW BISTROT DURANDO CAMPUS
On  Design Campus, the “La Rossa” bar left the management of the restaurant on July 25th. To avoid being without a bar service for almost the entire academic year we proceeded with a new call for bid and a new company is now in charge.  On the proposal of the Lista Aperta the time slot of the new Bistrot was extended to 7: 30-19: 30. Today the premises are completely renovated internally, the first floor of the structure has also been opened and, even on our recommendation, prices have been lowered.

MORE RESIDENCE SPOTS AND NEW RULES
Two new residences are under construction: one in Bovisa, via Baldinucci, and one in the Corvetto area, piazza Ferrara. Politecnico  has almost 2000 seats in students residence! As  it corresponds to 25% of the requests, a percentage which is clearly higher than the average of the Milanese and Italian universities by 8%. At the same time we worked a lot on the new Residence Regulations, to ensure that first and foremost the guest-students are aware of the regulations to which they are subjected (this was not the case today), but above all to ensure that it was a regulation to safeguard student rights and opportunities as much as possible  . For example: from now on, every student in residence can invite 3 friends over to study instead of two.

Update on campus Bonardi work
The new campus Bonardi, which will finally give wide-ranging to the visibility of our Athenaeum, is going to be inaugurated within September 2020. During these months we are working in order to make sure a fair number of areas are ensured for us, students, giving priority to wired studying areas and indoor places to eat.

Study areas
We are keeping in contact with the Dean and the offices, to remind them to consider the demand for study areas on Campus Leonardo even with small interventions. Moreover, we believe that it’s fundamental to turn study areas which already exist into full service ones thanks to improved space management, to the completing of the wiring and the installation of air conditioning in every classroom.

Works in the building “Nave”
In this building there are ongoing modernisation works which include the substitution of joinery and the facade restoration. Beyond that in a later stage all the classrooms are going to be renovated with a new electrical system and new furniture. These interventions, particularly the new joints, will help to reduce the building’s CO2 emissions.

Utilities and small interventions
In the last weeks containers for the recycling of models’ material have been placed around and a new regulation on the use of spaces where to collocate models was created as well: it is possible to apply filling in a form at reception. Moreover, a new area dedicated to coating will be realized near the “architettura’s patio”.

BOVISA AREAS
We are making efforts in an active work to solve problems, which lately have occurred, which deal with the poor number of study areas and indoor places to eat. We are satisfied with the fact that the Athenaeum has seriously evaluated our suggestions for areas like BL27, BL28, B2. Some of our ideas will soon be realized, the goal is to guarantee and improve study areas and to additionally raise the visibility of the Campus!

AGREEMENTS
We have suggested new mobility, medical insurance, software, computer and telephone agreements with the intent to make services more accessible, which we believe are worthwhile, for us students. Politecnico is developing the agreements and we will benefit from these soon hopefully!

DSU CALL FOR DIBS
We’ve added places in which it is possible to use eating vouchers by convention in Piacenza and Milano and we also aim to give the possibility to all students to use those vouchers during the weekend, the possibility of accumulating the unused vouchers daily is also available.

SPLITTING THE SECOND FEE
We are working to introduce the possibility of splitting the second fee in two minor fees as it becomes demanding for people in a medium-high income bracket or with siblings at university to pay a large amount of money at once. Hence collaborating with the offices we’re searching for a solution in order to give families the possibility to split the second fee.

MERIT PROJECT
During “Merit Project’s” modifications, student representatives from all lists have decided to: double contributions for students who participate in international competitions which take place in foreign countries and which are reported or sponsored by the Athenaeum. In this way contributions raise from 250€ to 500€. Increase the number of first year students who get the merit award which is assigned considering the amount of CFU achieved and the average mark between the marks of all exams passed after the end of September exam session enhancing the number of students awarded from 135 to 202. We are working to expand the merit fund by 15%, allocating an additional € 300,000 to increase scholarships for thesis abroad.

SERIST CANTEENS
The Serist company, which manages the food outlets on all Milan campuses, except the Bistrot of Durando and the bar of BL27 in Bovisa, will rescind its contract with Politecnico due to heavy economic losses. To achieve service continuity, we will launch a new tender for canteens in the coming months, which, most importantly, will have low prices, but at the same time won’t let a contractor win the tender with few guarantees to last a long time. Therefore quality must also be safeguarded.

EXAM OVERLAPPING
In recent years, despite an academic calendar with extended sessions, due to the lack of classrooms it is very difficult for secretariats to draw up a calendar for the exam dates. In the long term, an IT system will be implemented to manage this issue. For the next session in January February we have reported to educational offices all critical issues presented in the first draft.

INNOVATIVE DIDACTICS
We aim to understand whether the innovative didactics works in our school and how to implement it, the different software’s teachings could be integrated and submitted as new courses to our school. Currently some teachers of ‘Building Science’ are developing a mooc.