Anna and Bianca: the emergency told in first person 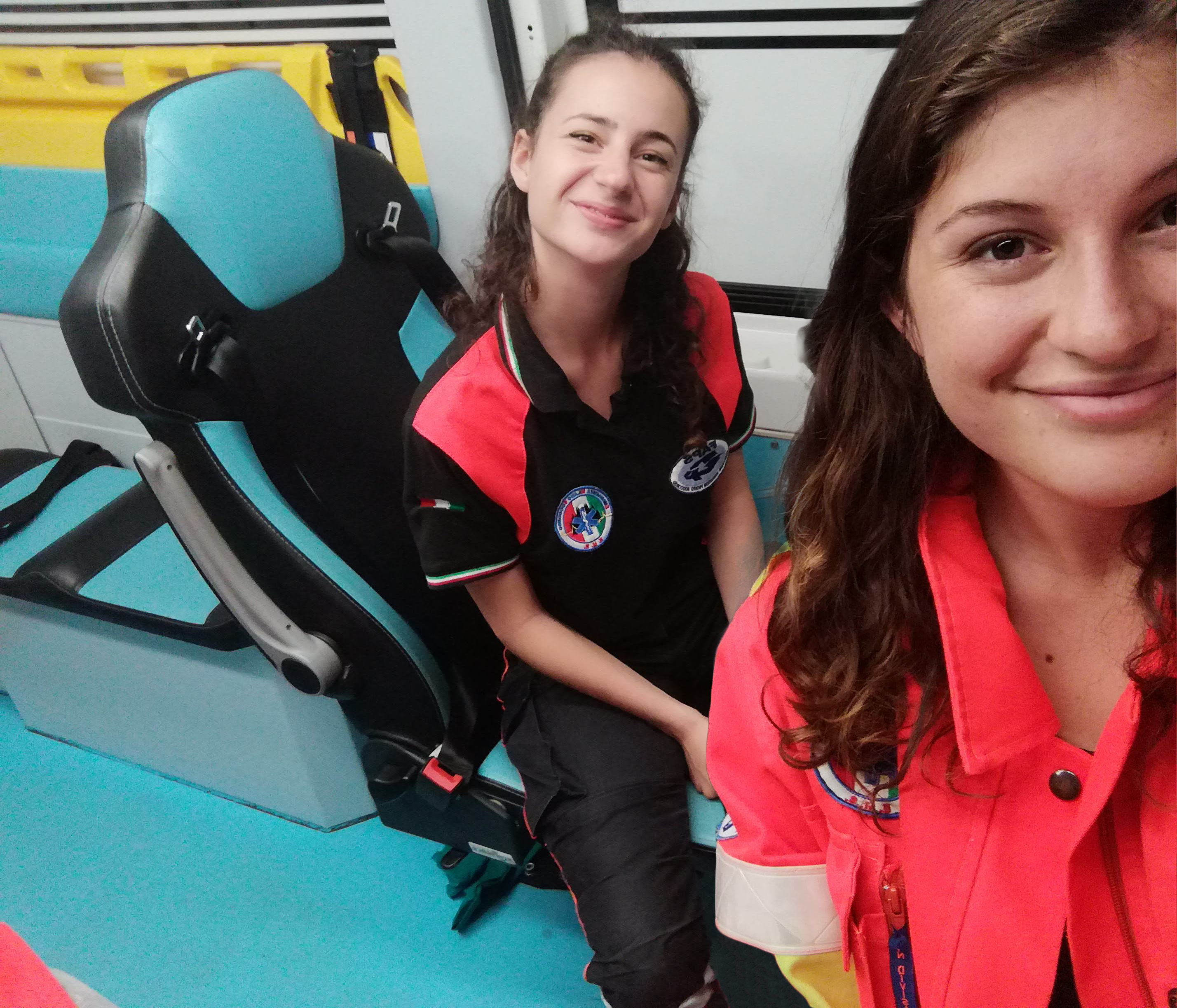 We are two volunteer rescuers of the EMS (Emergenza Milano Soccorso – Milan Rescue Emergency) association, and like so many other health workers we are personally dealing with emergency Covid 19. During this time we are living together, away from our families to avoid infections and to keep us company in dealing with this situation.

Since the beginning, this situation has shaken us from different aspects. In the blink of an eye, we had to start using new individual protection devices, to adopt new protocols and to follow the Areu directions which changed from week to week. The type of services has changed, there are certainly fewer traffic accidents but we meet an infinite number of elderly people with the same symptoms: fever, cough and respiratory problems.

By now most of the calls we get are as suspected covid cases: we enter the houses, all covered up, we asses patients, provide oxygen if necessary and based on how serious their condition is and on other factors we decide whether to leave them at home or take them to hospital.  But the thing that struck us the most from the beginning was perhaps the emotional and psychological impact that the pandemic had on people.  Now every service is a continuous repetition of greetings, goodbyes and gestures that are held back for fear. They are fathers, children, couples suddenly separated by the virus who cannot follow their loved ones, who do not know if they will see them again, who ask us how to keep in touch with them.

You never get used to death and suffering, but these are things we’ve already encountered in an ambulance. What we weren’t prepared for is the fear, anguish, and loneliness that affect and drag everyone. We want to tell you about two episodes which struck us in particular.

They call us for a cardiocirculatory red code for a 73-year-old man.

As soon as we arrive at the scene, the wife opens the door, we enter the house and find her husband on the ground. After an immediate evaluation, we find that the man is in cardiac arrest and we begin resuscitation maneuvers.

We activate the DAE, we start with chest compressions, until after 15 minutes the medical car arrives and declares the patient’s death.

Those words from the doctor are enough to go from a dynamic moment full of adrenaline and concentration, to a cold and deep silence. We move away from the body to allow his wife to approach, she bursts into tears, and leaning over him begins to kiss him.  We gather up our material in the most discreet way possible and in the meantime the doctor turns to the son to explain the various bureaucratic issues (funerals, certificates..). The son in tears but conscious enough to listen, interrupts him to say he would like to hug his mother right now, but the fear of contagion prevents him.

The doctor, astonished, replies: “You can give her a hug…”, but he does not feel like it, and he continues to keep a certain distance with the mask in his face.  Once the procedures are over, we put the body on the bed, offer our condolences to the family members and leave.

When I got home I couldn’t but think about what happened, not really about the service itself, but about the reaction of the son, which I couldn’t get. It seemed an absurd scene to me, which, if  decontextualized, could be called inhuman: the fear of the virus winning over a hug for a mother who just lost her husband.

I went through this shift when quarantine had not yet begun, but this episode was nevertheless a strong wake-up call to how fear and anxiety that characterize this pandemic can dominate over natural and affective feelings like that of a child towards his or her parents.

During a shift they call us for a psychiatric code yellow for a 45-year-old man.

He had gone to live with his parents to help them, that night he got drunk and wrote to his girlfriend that he wanted to commit suicide. He has a company with employees, he’s afraid he’s going to fail, that he’s going to have to fire people who trust him, who need a salary. In the house we find the police, his father crying, his mother still screaming and him not standing up. We take his parameters, we  ask him if he wants to come to hospital to talk to someone, but he doesn’t want to. We can’t do anything, so we leave, making sure someone stays with him all the time.

Since the beginning of lockdown, I have seen similar cases several times. People who had no priors and who suddenly had become a danger to themselves.  It strikes me because this virus has had a harder impact on the most fragile individuals in society, but not only symptomatically fragile, therefore the elderly and immunodepressed, but also psychologically. We all have experienced moments of anguish and fear, but not all of us are able to deal with them in the same way.

Facing such a dramatic situation, a question arises regarding the meaning of our contribution. The reasons why we continue to work shifts are the same as before, which is to actually help people in need.  We know that we cannot do so much, but we realize that the moment we meet him, the patient is in a situation of fragility, suffering and fear, and such instability leads him to be sensitive to everything around him, even to small insignificant gestures. That’s why the simple way we turn to a patient, the attitude we question him with (to asses him) or with which we ask him to gives us his arm in order to measure his blood pressure, to him  it can be very significant, even if it will not solve his problems.

And it is this higher attention to patients that educates us to give a new value to small gestures, which in their simplicity can make a difference to those around of us, it could be a patient, another time it can be your roommate you prepare dinner for, or the parents you call in the evening.